“Ayubowan” Warmly Welcome to Sri Lanka, the pearl of the Indian Ocean! On arrival at Bandaranaike International Airport, you will be greeted and assisted by a representative of Globeenjoy tours (your chauffeur guide) and drive you to the hotel in Colombo. It’s the commercial hub in Sri Lanka. Check in to the hotel upon arrival, relax and freshen up your selves to start the tour on the next day. 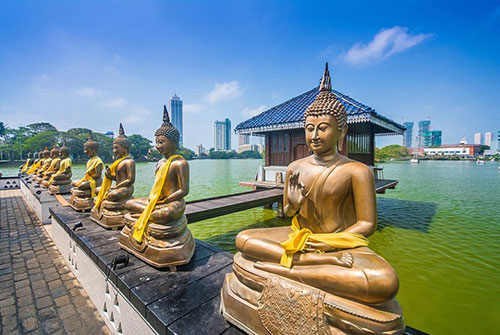 Colombo is the commercial capital and the largest city of Sri Lanka. It is located on the west coast of the island and adjacent to Sri Jayawardenepura Kotte (which is the official capital of Sri Lanka) suburb or the parliament capital of Sri Lanka. “Kolamba” (Anglicised “Colombo”) is a Sinhalese word; meaning port, ferry, harbor or haven. Colombo’s cosmopolitan side supports ever-more stylish eateries, galleries and shops. Surprises abound: with a little exploration you’ll find great local food, characterful shops and tiny, convivial cafes. Meanwhile, a building boom like no other is transforming the city’s skyline.

Revel in your journey to reach the stars at Cinnamon Red Colombo. As we soar amidst the bustling city, an inspiring ambience will greet you right at our art-infused car park. Blending in harmoniously with this aura is the state-of-the-art technology that gives you a glimpse at the express check-in. Bask in its company as it follows you to a comfortable room with a minimalistic, contemporary décor and extends to every corner. In Cinnamon Red, one of the highest rooftop bars in Colombo creates the perfect atmosphere to live it up, the infinity pool looks out at the beautiful sea of endless opportunities.

Pinnawala Elephant Orphanage (PEO) ; just as the name suggests holds a unique disposition in the ex-situ animal care. It’s success and fame has travelled not just within the country but throughout the world to an extent where Pinnawala synonymous with the Sri Lankan Elephant. The Pinnawala Elephant Orphanage was established by the Sri Lankan Department of Wildlife Conservation in 1975 for feeding and providing care and sanctuary to orphaned baby elephants that were found in the wild. 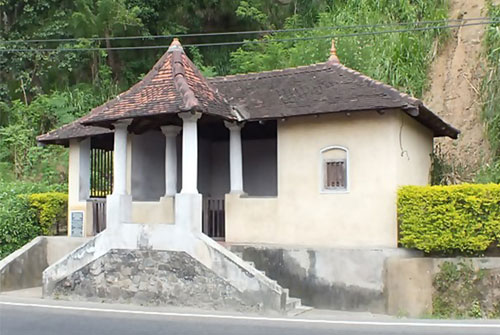 Ambalama is a historic wayside rest that is found – on the left, when traveling from Colombo to Kandy. a few meters before the Kadugannawa Hairpin turn aka Kadugannawa pass. Built in the early 19th century during the British colonial rule in Ceylon. the Ambalama is now more than 200 years old A popular stopover for horsemen and merchants traveling from the lowlands to the ancient hill capital Kandy, this structure resembles the Kandyan Era architecture and is of archaeological value. 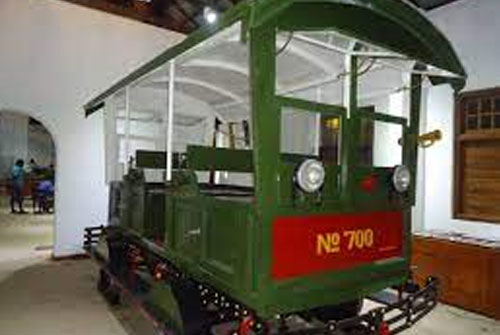 The museum was opened on 27 December 2014 in order to commemorate the 150th anniversary of railway service in Sri Lanka. Previously, the museum was located in Colombo. The old museum has been opened in May 2009. The museum has old engines, locomotives, rail cars, trolleys, carriages, machineries, and equipment’s that used since the beginning of Sri Lanka Railway. The first Train of the Ceylon Railway operated from Colombo Terminus station to Ambepussa conveying the Duke of Brabant of Belgium on 27th December 1864, This Museum Opening was held with the presence of Gathering of Special Guests and Public. 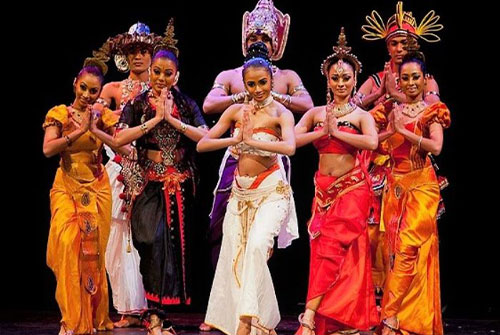 The culture of Sri Lanka mixes modern elements with traditional aspects and is known for its regional diversity. There are three main styles of Sri Lankan classical dance: The Kandyan dances of the Hill Country, known as Uda Rata Natum; The low country dances of the southern plains, known as Pahatha Rata Natum; Sabaragamuwa dances, or Sabaragamuwa Natum. “Ves” dance, the most popular, originated from an ancient purification ritual, the Kohomba Yakuma or Kohomba Kankariya. The dance was propitiatory, never secular, and performed only by males. Dances in low country are highly ritualistic. This form of dance is performed to appease evil spirits which cause sickness and is thus called ‘Devil Dance’. Sabaragamu dances are usually performed in Ratnapura, relating to the worshipping of God Saman much revered by local people. There are 32 main dances in Sabaragamuwa Style. 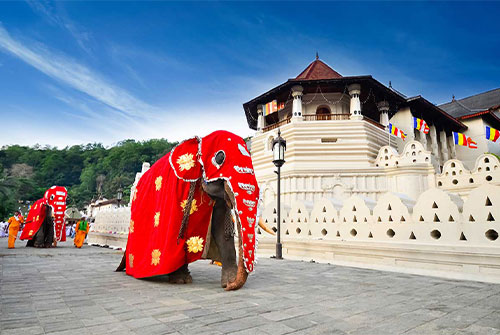 Temple of The Tooth Relic

Sri Dalada Maligawa or the Temple of the Sacred Tooth Relic is a Buddhist temple in the city of Kandy, Sri Lanka. It is located in the royal palace complex of the former Kingdom of Kandy, which houses the relic of the tooth of the Buddha. Since ancient times, the relic has played an important role in local politics because it is believed that whoever holds the relic holds the governance of the country. Kandy was the last capital of the Sri Lankan kings and is a World Heritage Site mainly due to the temple. 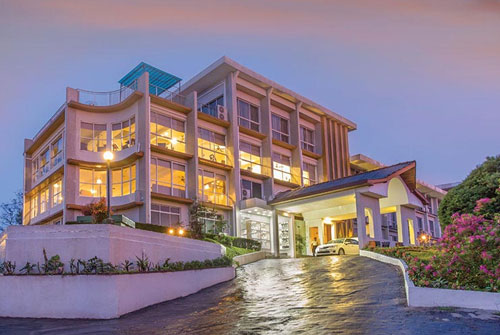 Situated on the highest point of Sri Lanka’s hill capital, Hotel Topaz is an enchanting Kandy city hotel that offers luxury and seclusion in the regal city of Kandy. Deluxe Rooms and Suites at Hotel Topaz are adorned with décor that is inspired by Kandy’s colonial heritage. All rooms come with first rate amenities to ensure that your indulgences and entertainment needs are satisfied. Panoramic views of the surrounding countryside are just one of the treats of staying at our hotel in Kandy. Wake up to green mountains surrounded by mist or a bird’s eye view of the Sacred Temple of the Tooth Relic, with a stunning view of Kandy town lit up in the distance providing the perfect backdrop to end each day.

Breakfast at the hotel, today you will be taking the train to Nuwara Eliya. your chauffer guide will pick you up from the Nuwara Eliya rail way station. Feel free to explore the city of Nuwara Eliya. 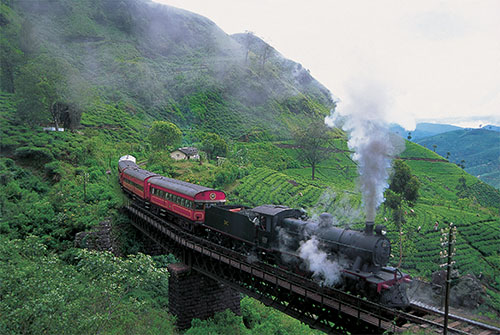 Train travel removes the stress from travelling to multiple locations while on vacation. Starting from Colombo Fort, one of the key railway stations in the Sri Lanka. There are many tourist destinations where you can travel by train from Colombo. It provides you with a great method of travelling because you get a clear picture of the country (Specially the beauty of the Tea Estates in Sri Lanka) which is not the case when you travel via the road, probably also in fear of your life. To discover the beauty of the countryside, travelling by train could be the best option even though this might be tedious as the trains are bit slow at some points. we always make sure you get the seats as in you are reserving a flight ticket before you travel. 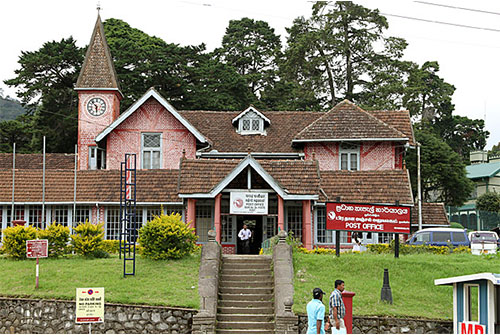 “Little England” they call it. It is a city in the hill country of the Central Province, Sri Lanka. Its name means “city on the plain (table land)” or “city of light”. With a picturesque landscape and temperate climate. It is at an altitude of 1,868 m (6,128 ft) and is considered to be the most important location for tea production in Sri Lanka. The city is overlooked by Pidurutalagala, and this genteel highland community does have a rose-tinted, vaguely British-country-village feel to it, with its colonial-era bungalows, Tudor-style hotels, well-tended hedgerows and pretty gardens. Indeed, Nuwara Eliya was once was the favored cool-climate escape for the hard-working and hard-drinking English and Scottish pioneers of Sri Lanka’s tea industry. 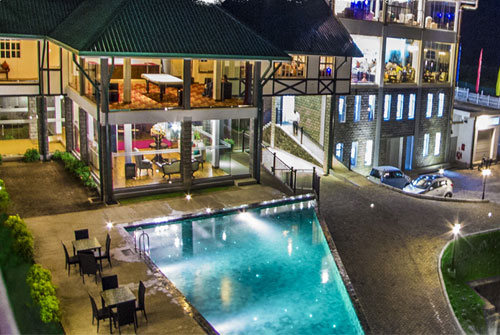 Peaceful and pristine highlands, blessed with captivating natural beauty and showcasing ancient colonial splendor; what more do you need to revive the mind and body? The Blackpool stands at an altitude of 1876m, surrounded by vast tea estates, carefully tended vegetable plantations and beautiful mountainous terrains. Indulge in the delicious, local and international cuisine that the Blackpool has to offer and relax in the luxurious rooms that look out to picturesque views presenting the true beauty of Mother Nature. The aroma of Ceylon tea coupled with the sweet-scented mist surrounding the area, adds to the beauty of the place.

Breakfast at the hotel, it’s the last day of your tour. You will be driven back to Colombo via Kithulgala. Optional white-water rafting at Kithulgala. 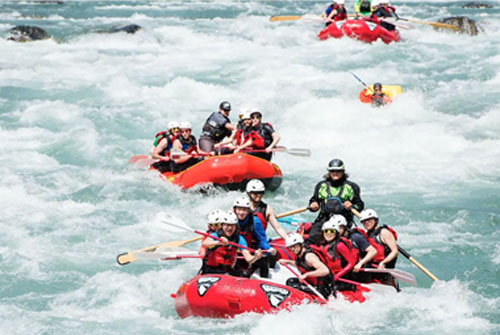 Kitulgala is the movie location of where David Lean’s 1957 epic, Bridge on the River Kwai was filmed. A calm stretch in the River Kelani between two rocky outcrops on either side is the movie location where the railway bridge for the movie was constructed. Kitulgala White Water Rafting takes about a 90-minute run each for 6.5 km with five rapids graded 2 and 3. The Rapids with their own distinctive characters are aptly named: Head Chopper, Virgin’s Breast, Butter Crunch, Killer Fall and the Rib Cage. Riding modern rafts equipped with safety gear, White Water Rafting at Kitulgala is safe for even kids over 10 years in age.

End of the Tour

Special Notes: We strictly request you to follow COVID-19 health protocol guidelines in the leaflets given to you by our national guide. It’s a must that you should follow these guidelines during the tour which is given by the Sri Lanka health ministry along with the Tourist board to make sure that you are safe and secure from COVID 19.